U.S. NAVY (and Other Military) DOCUMENTS 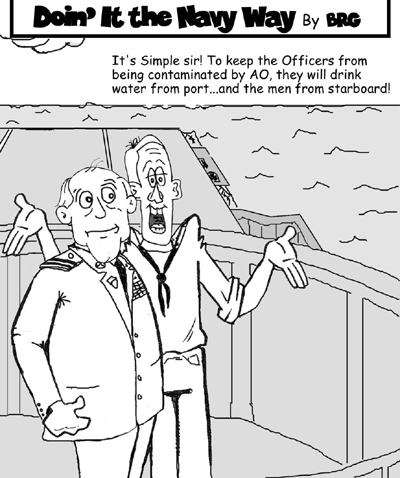 The National Archives and Records Administration (NARA) can provide you with copies of just about every naval ship's deck logs involved in the Vietnam Conflict. They have a web site at http://www.archives.gov/

These will be actual copies of the deck log pages, sometimes hard to read because of the handwriting, but none the less original. These are accepted by the VA as proof positive of a ship's activities.

You need to specify the exact dates that you want copies of. Last year their charge was $0.50 per page, and I don't know if that price has changed. There is an entry into the Deck Log EVERY DAY even when the ship is just tied to a pier and "nothing is happing" other than routine activities. If you are after the information on a ships location and what it was doing, you will find this in the Deck Log. If you are after a certain activity but are not certain of the exact date, then the best way to get this is to request the Deck Logs for a range of dates. E.G. if you know that sometime in April, 1968 an incident occurred and you want to see if it was recorded in the Deck Log, the best thing to do is to request the Log entries for the entire month of April, 1968. Some days the entries are one paragraph. Some days the entries take up one or more pages.

The NARA can be contacted by phone to place an order and they can research something to let you know how much your order will cost (like the example of needing the entire month of April, 1968).. or at least they used to provide that service prior to placing an order.

Navy Personnel Diaries (often referred to as muster rolls) for 1976 and earlier are located at: Archives II Reference Section, National Archives at College Park, MD. Since there are PII issues for 1971-1976, the microfilm rolls have to be reviewed before they can be made available.

These provide a listing of anyone who reported on-board each day, anyone who left, anyone who did not report, and anyone who reenlisted. They also include copies of the Officer Distribution Control Report (ODCR) and the Enlisted Distribution Verification Report (EDVR). Individuals are listed by name, rank/rate and social security number.

The Archives II Reference Section (RD-DC) does not have custody of the U.S. Navy operational records from the Korean and Vietnam Wars. For access to these materials, write to the
Operational Archives Branch
Naval History & Heritage Command
805 Kidder Breese Street, SE.
Washington Navy Yard
Washington, DC 20374-5060.

Higher rate of Cancer incidents occurred in Veterans of the Naval Services. This is a VERY large file at this time (12 Megabytes)

Admiral Zumwalt's 1990 Report on the "...Association of Adverse Health Effects and Exposure to Agent Orange..."

27 June 07 - Admiral Zumwalt's 1999 Interview wherein he states: "We found and reported in that report that the Bureau of the Budget had ordered all the agencies of government in essence not to find a correlation between Agent Orange and health affects stating that it would be most unfortunate for two reasons: A) the cost of supporting the veterans and B) the court liability to which corporations would be exposed."

The Admiral Zumwalt acrhive at Texas Tech - grab copies now... these sorts of sites have a tendency to disappear.

Why is the Navy concerned with Weed Control?

26 June 07 - Technical Link Related to organic chemists very recently perfecting a way to eliminate trace amounts of dioxins from Silvex, creating a purification process to render Silvex less deadly - which it was without this process.

1 July 07 - The TTCP - The Tripartite Technical Cooperation Program This section will begin compiling information on this 25 October 1957 agreement between the U.S., Canada and Great Britan which very literally allowed these nations to jointly or separately use their own or each others' soldiers in experiments testing weapons of war. When Australia (1965) New Zealand (1969) joined the TTCP, the organiation name was changed to simply The Technical Cooperation Program.

RETURN TO the Main Page