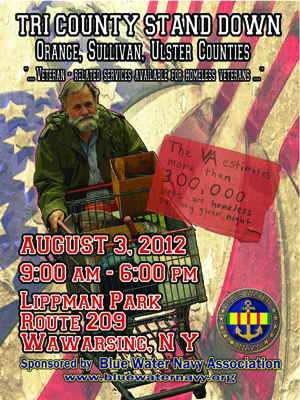 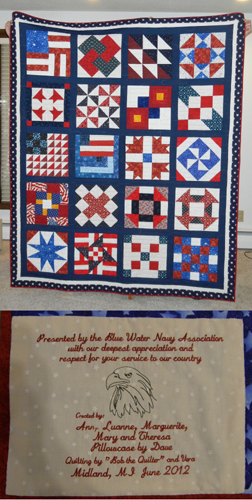 The first Stand-Down ever to be held in the Lower Hudson Valley will take place on August 3, 2012 in Lippman Park, Wawarsing, NY.

A Stand-Down is an event made popular by the Vietnam veterans as a bringing together of local, regional and national resources for veterans at a central location, to include access to immediate medical needs, benefits counseling, personal health items, resources for homeless veterans, and camaraderie. A Stand-Down often includes refreshments and entertainment, as will be the case here.

The Blue Water Navy Association is making this event available to all veterans in the area, especially those who are homeless and including veterans of the recent wars in the Middle East.

All veterans from Orange County, Sullivan County and Ulster Counties will be provided with assistance with VA Disability Claims and other VA benefits filings, as well as health check-ups, haircuts, entertainment and a host of local, state and federal resources intended to help make their lives easier.

The Blue Water Navy Association is planning something unique for the August 3 Stand-Down. We will be giving away a beautiful, hand-made quilt. Made by some very talented and patriotic women in Midland, MI, the quilt is about 65” x 78” to fit a twin sized bed. The label sewn to the inside corner is also shown.

Photos to be added soon!

The Stand-Down is Over
and it was a Resounding Success!

A Stand-Down for homeless and needy veterans was sponsored by The Blue Water Navy Association and held in Ulster County, NY, and it was an overwhelming success! The Community is already asking if we can do one again next year. We will probably say “Yes.”

This event was primarily the work of Navy Widow Carol Olszanecki, the Blue Water Navy Project Manager, with help and guidance from our Special Consultant Paul Sutton, a Vietnam War Marine veteran. It was a true Community-wide event and all the ground work and the knitting together of local and Federal resources was done by Carol and Paul over the past year.

We estimate that 65 to 70 homeless or needy veterans came through the set up and were completely surprised at the wealth of materials and assistance available to them.

Many wonderful things went on throughout the day at Lippman Park in Wawarsing, NY. A donation of 40 cans of soft drinks by the ShopRite Store of Ellenville, NY, included the tub and the ice to keep these cool in the 95+-degree heat. ShopRight kept the ice topped off throughout the day and even replenished the water supply later in the afternoon. Shop Rite had also collected canned and dry foods in their store and they presented these items for the veterans to take with them. All the leftover cans and such were taken to The Food Bank of Ellenville, run by Reverend Collins, to distribute to needy families in the Community.

The Hannaford Store of Pine Bush, NY provided 10 cases of water, which was appreciated because of the extreme heat of the day. Several sources of food were available including Sandwich Wraps donated by Shop Rite along with chicken and salad made available by two volunteer women from the Community.

The New York National Guard provided four tents and four men who stayed throughout the day to help with moving stuff around and other tasks as required. At 6:00PM, the official closing of the event, they took the tents down and returned to the National Guard Armory. Their help, especially in unloading the truck, was very much appreciated.

The Sullivan County and Ulster County Veteran Service Offices each had a table to hand out information and assist veterans in understanding and filing VA Disability Claims as well as submitting Forms for VA Health Care Enrollment and the VA Traveling Health Van from the Montrose VA Medical Center was set up to discuss health issues with the visiting veterans. The Ulster County Department of Health provided a nurse and a table with their informative healt-wise handouts.

The Pioneer Volunteer Fire Company leant to us the tables and chairs for service providers to use to display their materials and the Town Counsel of Wawarsing, NY not only donated the use of the park, but the Town Board Supervisor and another Board Member showed up to see how things were going. They left very pleased.

A representative from Congressman Chris Gibson’s office, Mr. Jim Haggerty, was on hand and had played a role in helping Carol make a few resource connections during the planning stage. New York State Senator John Bonacic had been sent a personal invitation and he made an appearance to check things out.

Julian Shribman, candidate for Congress, stopped by to learn about the plight of the Blue Water Navy Vietnam veterans who have had their Health Care benefits withheld by the VA for any conditions resulting from their exposure to dioxin-based herbicides like Agent Orange while serving offshore Vietnam. All other Vietnam veterans still receive these benefits, but Navy, Coast Guard and Marines who served offshore now have to pay for their own medical bills for things like cancer treatments. That financial burden is driving nearly all of them into the Poor House and shortening their lives because these service-connected conditions are not being provided for by VA Health Care, as they are for every other Vietnam War veteran. But despite these hardships, The Blue Water Navy Association continues to reach out and help other veterans in their dealing with the Department of Veterans Affairs.

Other local participation also included Lady Katherine’s Beauty Salon, who donated combs for the veterans. Additionally, the VA provided Personal Care Kits that contained toothbrushes, tooth paste, hair brushes and other personal hygiene items. The Samaritan Village, an all-female veteran rehabilitation Center, not only had an information table, but several of the women attended both to help with the work and to use some of the services that were available. Ernie Belanger provided the entertainment with a constant stream of 1960s music from CDs, punctuated by his own performance on the Keyboard.

Common Ground, a VA-funded program for providing temporary and long term housing to veterans, also had an information table.

Senator Kirsten Gillibrand sent a letter that was read to all the attendees praising the veterans of this country. A few of the local staff from Senator Gillibrand’s office delivered this letter.

An 80-foot tractor-trailer showed up fully loaded with boxes containing all manner of clothing ranging from shirts, pants and jackets to bath towels to boots and sleeping bags. These items were shipped from the VA’s warehouse in New Jersey. It took the four National Guardsmen, with a little additional help, almost four and a half hours to unload all the boxes of clothing and other items from the truck.

Excess clothing items; of which there were plenty, were strategically placed in the homeless veteran support system. Some was given to the various County Service Offices so they would have these items on hand when needed for veterans who come to their offices. The bulk of surplus supplies were taken by the Elks Club of Napanoch, NY to be stored for future use, although a distribution of this clothing occurred on August 15, when Sue and Ernie Belanger delivered a load of clothing to Mr. Don Little, Director of two Veteran Shelters. “Vethelp” provides a homeless shelter for male veterans and “The Guardian” provides a homeless shelter for female veterans. And during all this, Special Consultant Paul Sutton could be seen providing important information and guidance on many issues regarding VA Benefits to the veterans and their families. Sue Belanger, the Blue Water Navy Special Projects Director, assisted with her knowledge of veteran issues and benefits.

As a very special event, The Blue Water Navy Association gave away a hand-made, twin bed sized quilt to a lucky veteran. Mr Jim Sarles, a Vietnam vet, won this beautiful product of a patriotic group of women in Midland, MI who donate quilts to veterans. The letter that accompanied the quilt was more than heartwarming.

Photos of the activities and items can soon be found on The Blue Water Navy’s Web site at http://bluewaternavy.org/standdown.htm .

Return To The News Page