Rating insignias from the 1940s

Using the Combat Naval Gunfire Support Database (CONGA), one can account for every round fired by every ship during the Vietnam War (and other times). The database for that information is entered HERE

Getting Information About Your Ship amd Medals

A Quicker, Better Way
added 15 Aug 2011
Use OPNAV 1650 - it lists all the ships (?since WWII) that earned any award, including those that the crew are entitled to wear. You can use this to find out, for instance, the exact dates your ship was in the combat zone and earned the VSM and the campaign stars that go with that.

Sailors are often asked specific questions about when and where they served, details of their duty station, their presence on Inland Vietnam waterways, etc.

The follow are some ideas of finding what awards your ship might have earned, and the exact date(s) it was in the War Zone in the Vietnam Theater.

REVELANT DATES OF SERVICE IN VIETNAM THEATER OF OPERATION (Vietnam Service Medal (VS) AWARD DATES)
and COMBAT VETERAN (Combat Action Ribbon (CAR) AWARD DATES)
This will also pin point the dates one would use in requesting Deck Logs to prove times you were in the War Zone.

Once your ship appears, look under the column headed Appr Award and scroll down until you see "VS" appear. This stands for Vietnam Service.
Look at the dates displayed - noted as Merit Start and Merit Stop. These are the dates your ship was actually in the “theater of operations.”
Use this in conjunction with obtaining Deck Logs. Since you now know when you arrived in VietNam and when you left, you can select the groups of dates to show the precise period (days) you were actually in theater without paying for additional pages when you were at another location.

Use this same procedure for finding the date your ship was awarded the Combat Action Ribbon. Under Appr Award, scroll down until you see "CR", which stands for Combat Ribbon.

These are the latest updates anywhere on the web site in chronological order ....
check this list for the LATEST POSTINGS for ALL sections

Carrier Deployments During the Vietnam War

Lists Port Visits for Aircraft Carriers During the Vietnam War

Kudos to the USS Lake Erie, those ships like her, and to the men and women who keep them afloat.

By Jim Garamone, American Forces Press Service PEARL HARBOR - The crew members of the USS Lake Erie (CG 70) were calm as they fired the latest shot heard round the world. The Aegis-class cruiser fired the missile that destroyed a dead spy satellite that posed a threat to humans Feb. 21. Capt. Randall M. Hendrickson, Lake Erie's commanding officer, spoke to reporters Feb. 24 aboard the ship, which has just returned from the mission. The visiting reporters are traveling with Adm. Mike Mullen, the chairman of the Joint Chiefs of Staff, who visited the ship.

The ship's weapons systems officer, Lt. Cmdr. Drew Bates, said the rehearsals really helped when push came to shove. "By the time we did this, we had seen it a hundred times," he said. "We were practicing what to do in case things go wrong. Fortunately nothing went wrong. This went just the way it was designed to happen, and hats off to the industry team for giving the nation a system that was able to have the excess capability to do this." The satellite was unlike any target the system was designed to go after, the captain said. The satellite was in orbit rather than on a ballistic trajectory. Also, the satellite was traveling at incredible speeds.

Lake Erie left here the day officials announced President George W. Bush's decision to try to shoot down the satellite. Hendrickson said the ship was in position when the shuttle Atlantis returned from its mission. The ship received the order that Defense Secretary Robert M. Gates had OK'd the mission at mid-morning on Feb. 21. "From that point on, the ship was very calm," Hendrickson said. "Obviously, the closer we got, there was a lot of anticipation. The firing team was very calm when we did it and, with the exception of the 'whoosh' when it went out of the launcher, it was just as scripted." He said that when the missile's seeker opened its eyes it had the satellite "right dead center." When the missile hit the satellite, "there was a lot of cheering" aboard the ship, he said.

The reaction of the crew is unbelievable, said Command Master Chief (AW/SW) Mack Ellis, the highest-ranking enlisted Sailor aboard Lake Erie. "Even the youngest Sailor who didn't understand it at first, every time they walk somewhere and people know they are from Lake Erie, they say congratulations. It puts a smile of their face and makes their day."

2 July 08 - Email from Navy Department Library requesting information on the Naval Designation of the location (miles from shore) the Combat Zone extended for the Vietnam War. Note the mention of the "landmass encompassing Thailand."

Sec. 2. Notwithstanding section 3 of the Executive Order No. 10977 of December 4, 1961, establishing the Armed Forces Expeditionary Medal, any member who qualified for that medal by reason of service in Vietnam between July 1, 1958, and July 4, 1965, shall remain qualified for that medal. Upon application, any such member may be awarded the Vietnam Service Medal in lieu of the Armed Forces Expeditionary Medal, but no person may be awarded both medals by reason of service in Vietnam and no person shall be entitled to more than one award of the Vietnam Service Medal.

Sec. 3. The Vietnam Service Medal may be awarded posthumously.

The Vietnam Service Medal was awarded to veterans who served within the precisely outlined areas which the Department of Defence specified as the War Zone for Vietnam. It is described as follows:

This Image shows the outline of the area of ocean water as designated in the description above, which then follows the land basedboundary of the Country. 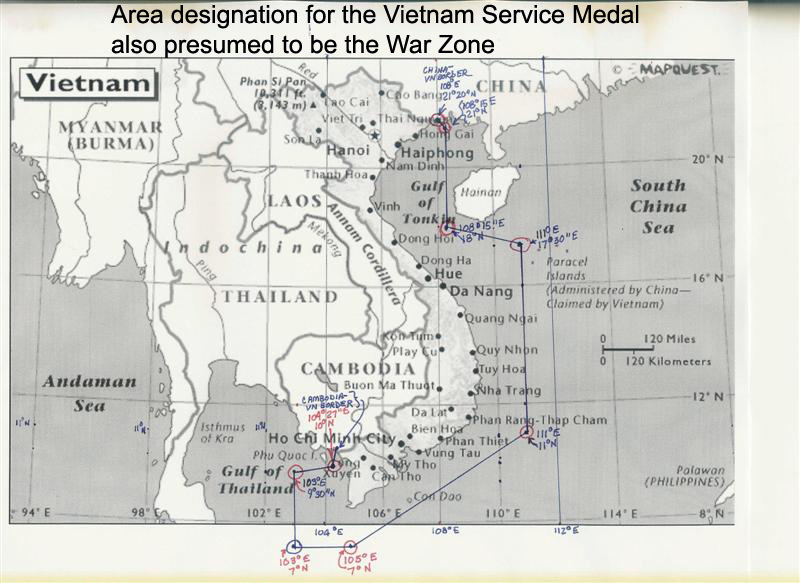 RETURN TO the Main Page